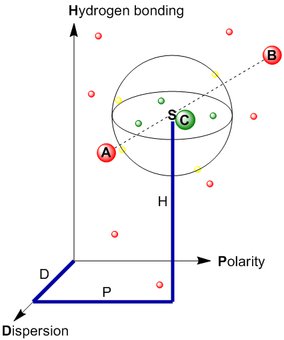 The group of alternative solvents contains only those that are chemically compatible with your application. Strategies for solvent replacement may either focus on the solvent to replace or on the application the solvent is used to, e.g. a reaction.

Strategy 1 with focus on solvent S to be replaced

This strategy implies that solvent S has been the optimal choice for the application. Solvent S and other chemically compatible solvents are placed in the HSP space. Similarity of alternative solvents can be ranked according to their distance to S where the best candidates have short distance to S. Solvent S can be replaced by a close neighbor solvent like C. But even 2 bad solvents like A & B here mixed in vol ratio A/B = 2/1 may substitute S if A and B are miscible.

Single solvents and solvent pairs are listed by increasing distance to S.

Strategy 2 with focus on the application of solvent S 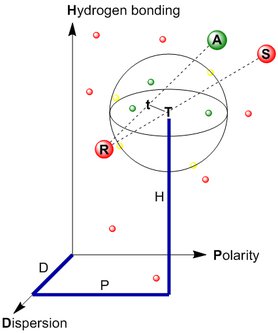 This strategy tries to resemble the current process blend of reactants R and solvent S representet by the virtual reaction point T. The volume ratio of solvent S / reagents R define the position of T on the R-S line.

The alternative process with solvent A uses the same reagents R and has the virtual process point t. The distance T-t is minimized by moving t on the R-A line which defines the optimal volume ratio of solvent A / reagents R.

Two-component systems of reagents R and the alternative solvent A were ranked by increasing distance T-t.

This approach was successfully applied on an alkylation reaction, however the customer decided to keep the details unpublished.